Troubadours and the Crusades: The case of Raimbaut de Vaqueiras (d.1207) 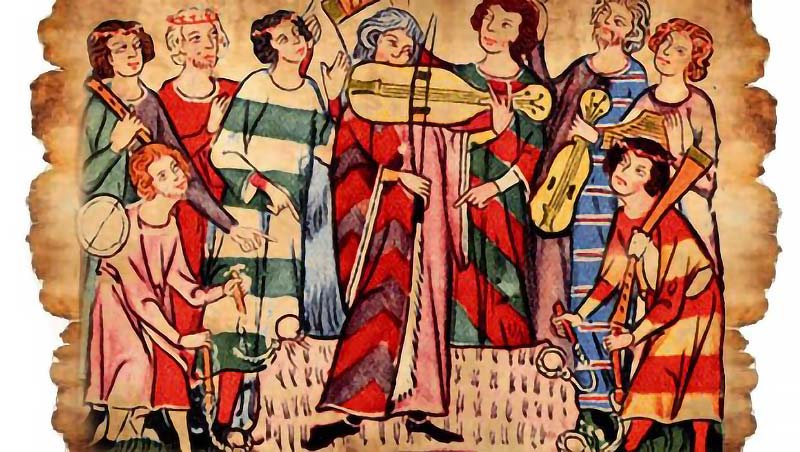 There are about 250 works preserved with music while the total repertoire is found in around 95 manuscripts all of them compiled in later years having the earliest in 1254 and continuing into the 14th c.

The codices, the collections of the works, were put together a lot later than the period in which the works were written or their music was performed.

There are four main manuscript sources with music of the troubadours:

Despite the fact that their history coincides with the crusades, only a few troubadours took part in them. The ones who did take part in the 4th crusade and found themselves in the Greek territories of the Byzantine Empire were the Provençal troubadours Raimbaut de Vaqueiras and Elias Cairel, the Lombard Oberto di Biandarte and possibly, the Provencal Gaucelm Faidit.

In March 1201, the count Thibaud III de Champagne (1179-1201) died and Boniface I del’ Monferrato (1150-1207) was elected leader of the crusade. In December of the same year, Alexios VI Angelos (1182-1204), escaped from the prison of Constantinople, where he had been incarcerated with his father, emperor Isaakios II Angelos (1156-1204) after the two had conspired against his uncle, and Isaakios’ brother, Alexios III Angelos (1153-1211). Alexios IV reached Germany and met with Boniface of Montferrat in the court of Philip of Swabia, asking within a month, the help of the crusaders in getting reinstated as emperor, offering in exchange assistance with the crusade under way to the Holy Land. In April of 1202, in Venice, a crusaders’ army gathered from Champagne, Flanders, Burgundy and other parts of France as well as Northern Italy. An agreement was signed between the crusaders and the Venetian Doge Enrico Dandolo under the terms of which the Republic of Venice would provide the army with ships and food, in exchange for 85,000 silver marks. The agreement wa signed by Pope Innocent III (1161-1216) who, nevertheless, demanded that they respect the Christian populations they would encounter. The crusaders left Venice on May 24, 1203. After pillaging Zara on behalf of the Venetians, they departed for Corfu. In Zara, Alexios IV met the crusaders and renewed his promises of money and soldiers, if they helped him reclaim his usurped throne in Constantinople. On June 24, the army arrives at the outskirts of Constantinople. The French historian Geoffrey of Villehardouin describes how impressed the Latins were by the spectacle of that city, its spacious churches and high fortifications, while the denizens of the city were equally impressed upon facing the enormous army of the Franks. The conquest became final on the 13th of the same month. The catastrophic pillaging which ensued, lasted for two days. The dissolution of the empire resulted in the partitioning of the state and the relevant document became known as Partitio Terrarum Imperii Romàniae. 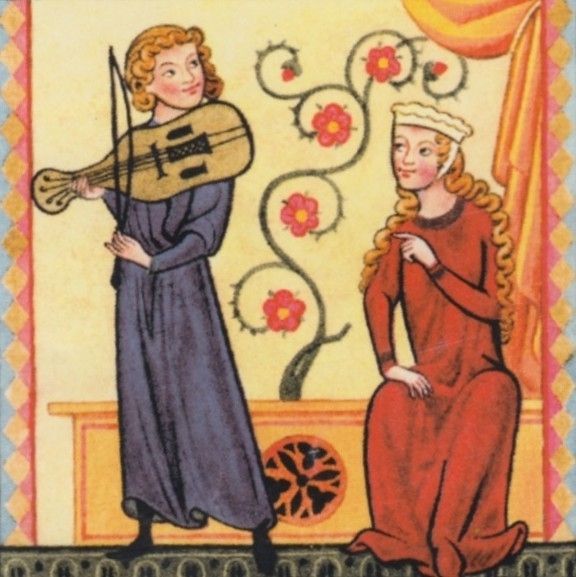 After the fall of Constantinople Raimbaut de Vaqueiras, who took part in the beginning of the crusade attached to his patron Boniface of Monteferrat, was connected to the newly established Kingdom of Thessalonica under Boniface.

According to the biography of Raimbaut, he was born in Provence, in Vaqueiras, near Orange, France. He was a minstrel of humble origins who was later appointed knight.
The razo from codex P 43 begins by giving basic information on his descent and his attribute as a minstrel (joglar). Also, it provides information about his relationship to important rulers of the time.

His life was eventful and tumultuous and he was one of the few troubadours to participate in such a large number of expeditions. He established an association with Boniface of Montferrat from a young age and followed him in travels and wars to Northern Italy, Sicily and finally in Romania where he took part in the siege and conquest of Constantinople (which he describes in his epic letter) and later in Boniface’s expedition to Macedonia, Thessaly, Evia, Attica and Corinth. In all likelihood, he died alongside him in the Bulgarian ambush of 1207, as he left no work after that date nor wrote and lament, planh, for the loss of the ruler, as was common practice.
Before the crusaders’ expedition, on the occasion of the crowning of Boniface de Montferrat as its leader at Soisson, in March of 1201, he wrote the crusade song, chanson de croisade, “Ara pot hom connoiser”. Raimbaut urges his comrades to raise the banners and march against the infidels at a point in time when the decision to march against the Byzantine empire had yet to be made. The initial plan was to attack Egypt and then march on to the Holy Land. Following Venice, however, and with the pillaging of Zara on behalf of Venice, they decided to heed the call of Alexios IV for help and veer towards Byzantium.

In Romania, he wrote four works which are to be found in important sources of that time.
In chronological order, his works that engage with this last period of his life, include the sirventes “Conseil don a l’ emperador”, composed in 1204 in Constantinople. This is an advisory poem towards the Latin emperor, written after the crowning of Henry of Hainaut and reflects the disappointment of his protector Boniface at not being elected to the highest rank.
The partimen “Seigneur Coine” is a dialogue between the poet and the French trouvère Conon de Béthune. It was written in Constantinople in the summer of 1204.

His two last poems are the historically significant epic poem “Valen Marquis”, written in the spring of 1205, and his last recorded composition is titled “No m’agrad’ iverns ni pascors”, written in June or July 1205, whose music survives as well.
His epic poem is addressed from the poet to his patron and friend, King Boniface. It’s similar to a chanson de geste gives a lot of valuable information, often autobiographical in nature, from the time when the poet met and became friend with the young marquis in northern Italy and during their more recent adventures in Romania. From the events described in the poem we can conclude that it was written in the spring of 1205, before the catastrophic defeat of the Franks by the Bulgarians in Andrianople, and after Boniface of Monferrat had concluded his conquests in southern Greece.
The canso-sirventes “No m’agrad’ iverns ni pascors”, survived with music, starts out as an elegy and ends in a dithyrambic tone, with promises of more conquests. It was written in all likelihood shortly after the epic poem and in the aftermath of the crusaders’ heavy defeat in Adrianople on April 14, 1205, which would place it in June or July of that year.
Raimbaut wrote in a great many and diverse genres. The style of his poetry is thoroughly unburdened from the complicated style of previous troubadours and he is known for one of the most famous troubadour works; the estampie “Kalenda maya”. He was more closely allied to the house of Monferrat than any other troubadour and his influence on Italian court poetry was decisive.

The art of the troubadours, their monophonic songs and elaborated often highly sophisticated poetry, was strongly connected to the rhetorical art. Their poetry was meant to be recited aloud in front of a courtly audience as well as  their songs too. Unfortunately the notation and the sources does not give us many concrete answers on rhythmical aspects, on performance traditions, on the use of specific instruments or whether the singers should perform with accompaniment or not. There were, though, joglars that played musical instruments and probably accompanied some troubadours. In the manuscripts we find some depictions of troubadours with instruments too. The popular instruments of the time, like the fiddle, the harp and the lute could have been in use for accompaniment.

The text-music relations do not give specific associations between particular types of sounds with particular melodic figures. According to E. Aubrey we find open and closed vowels both with single notes or melismas and on high or low pitches.

The challenge of the modern performer would be to experiment on different ways of singing expression and instrumentation in order to deliver the, often obscure, meanings of that poetry. The sound of the old Occitan being already a sound perspective of musical value on its one.

Last but not least one could make an effort to dive into the medieval culture and mentality, through readings, sources, visual material, theology, philosophy and world view in order to be acquainted with the spirit of the time and understand its music and poetry as an expression on a cultural context. 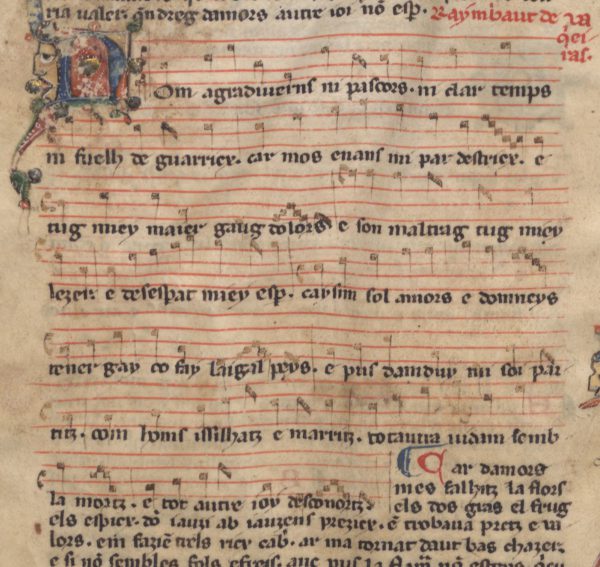 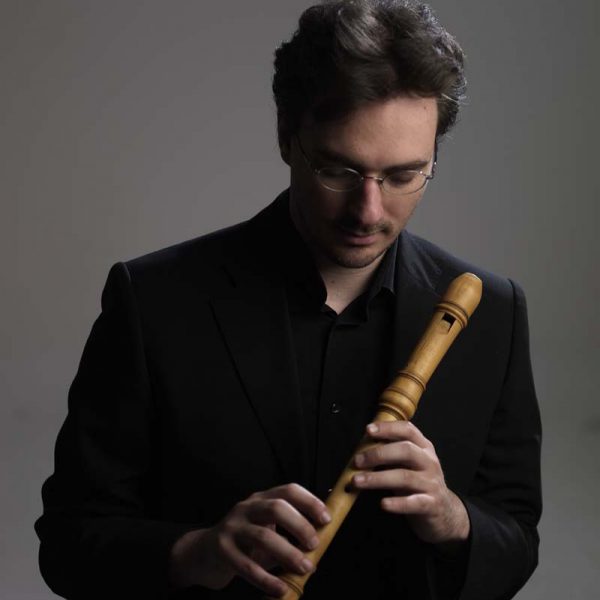 Born in Greece Dimitris Kountouras studied recorder, traverso and early music in Utrecht, Milan (on a Marco Fodella scholarship), Vienna and Trossingen with Kees Boeke, Heiko ter Schegget, Wilbert Hazelzet, Daniele Bragetti and Marcello Gatti. He got a PhD on historical musicology from the Athens University and he was a post doc scholar for the Centre of Humanistic Studies in 2016 for his research on the Troubadours at the Latin Kingdom of Thessalonica.

He founded Ex Silentio ensemble in 2001 specializing on early music and on Mediterranean musical traditions. He collaborated with Armonia Atenea (G.Petrou), with Harmony of Nations Baroque Orchestra and the Vienna Symphony Orchestra (Ph.Jordan). He appeared in venues and festivals in many European countries, in the Middle and the Far East, such as Sala Verdi in Milan, Pablo Casas Hall in Tokyo, Konzerthaus in Vienna, Megaron in Athens, the J.S.Bach Festival in Riga, the Blumenthal Festival in Tel Aviv, the Styriarte in Graz, the Bahrain Festival, the Banchetto Musicale in Vilnius, the Via Medieval in Mainz, the Mousike’ in Bari etc.

His research interests are including the relations between the renaissance humanism and music, the troubadours and the crusades and the historical performance practice. He published articles and essays for Brepols editions, for Nefeli and for Fagottobooks. Next to the renaissance and baroque recorders and flutes, he plays medieval transverse flutes and traditional winds of the Mediterranean.

Ex Silentio ensemble specializes on early music and on Mediterranean musical traditions. Founded and directed by the recorder player Dimitris Kountouras the ensemble performed in important venues and festivals such as the Banchetto musicale in Vilnius, the Via Medieval in Mainz, the Trollhaettan Early Music Days, the Styriarte in Graz, the Nicosia Early Music Festival, the Megaron and the Hellenic Festival in Athens, the Musica Antiqua in The Hague etc. Ex Silentio recorded five CDs for Carpe Diem Records Berlin (Mneme: Medieval music from the Mediterranean, Lethe: In the courts of the Orient), for Talanton (Nell’autunno di Bisanzio) and for Nefeli (Music of the Troubadours at the Kingdom of Thessalonica and Music in the Court of Lusignan).