The composer Johann Kaspar Kerll personally experienced the siege at the gates of Vienna and, overwhelmed by his impressions, wrote a mass which was intended to provide “comfort in the lamentations on the siege of Vienna”; the Missa In fletu solatium obsidiensis Viennensis.

Johann Kaspar Kerll is by no means unknown among seventeenth-century composers. Modern dictionaries of music all mention him as an outstanding composer of organ works that are available in various new editions and can regularly be heard in concerts. It will therefore probably come as a surprise to most informed musiclovers that Kerll’s contemporaries esteemed him above all for his sacred vocal compositions and chamber music. The intention of the present recording is to acquaint a broader audience with this unknown side of Johann Kaspar Kerll.

Johann Kaspar Kerll was born in the town of Adorf in Vogtland on April 9, 1627. He probably received his first instruction in music from his father Kaspar Kerll, an organist and organ builder. The family stemmed from St Joachimsthal (Jáchymov) in Bohemia, which they had been forced to leave because they were of the Protestant faith. Johann Kaspar Kerll’s extraordinary talent won him the position of organist at the court of Archduke Leopold William in Vienna, where he took lessons with the imperial Hofkapellmeister Giovanni Valentini. The archduke soon sent him to study with Carissimi in Rome, where it is possible that he met Frescobaldi. And it was in Rome that Kerll’s first known composition was published, as part of Athanasius Kircher’s Musurgia universalis (1650), which was dedicated to Archduke Leopold William. It is not clear whether, after completing his studies at the court, Kerll went to Brussels, where Archduke Leopold William had resided since 1647 as regent of the Low Countries. Nor do we know exactly when he went over to the Catholic faith, but it seems probable that his conversion was a prerequisite imposed by the archduke in connection with the organist’s post and the scholarship.
On February 27, 1656, Kerll became vice-kapellmeister in the service of the Bavarian Elector Ferdinand Maria in Munich, where he was to assist Hofkapellmeister Giovanni Giacomo Porro, who had been ill for a long time. Porro died at the beginning of September and on September 22 Kerll was appointed Hofkapellmeister. In spite of the havoc wreaked by the Thirty Years’ War, Munich possessed an admirable Hofkapelle, and Kerll raised it to new standards of excellence. January 1657 saw the premiere of L’Oronte, the first of at least four operas Kerll wrote. They have all been lost, together with the school dramas written for the Jesuits in Munich and the additional pieces for ballets, pastoral plays and the like.

The great upsurge in court music in Munich under Kerll’s direction caused the elector to reward the composer with a title and various gratuities over and above his salary. When the Munich Hofkapelle presented itself at the convening of the Regensburg Parliament in 1664, Kerll was given noble rank by Emperor Leopold I. Only two authenticated works written during his term of office in Munich survive: a Requiem in the old style and Delectus Sacrarum Cantionum, a collection of 26 sacred concertos for various forces, two of which can be heard on this CD.

Kerll resigned from the post of Hofkapellmeister in 1673 and moved to Vienna. The exact reason for his leaving Munich is not known, but it does seem that the assertion Johann Mattheson makes in his biographical dictionary Grundlage einer Ehrenpforte (foundation of a triumphal arch – Hamburg 1740) gets to the heart of the matter: “The resentment, especially on the part of the foreigners [Italian members of the Hofkapelle] at last reached a head and could no longer be contained.” Initially, Kerll seems to have earned a living in Vienna by teaching; from 1675 he received an imperial pension and was appointed organist to the imperial court in 1677.

Two momentous events occurred during Kerll’s time in Vienna which left their mark on Kerll and on his works: the loss of his wife to the plague in Vienna whilst he himself was away in Prague with the imperial court in 1679, and the Turkish siege of Vienna in 1683, which he experienced at first hand. The latter event occasioned his Missa in fletu solatium obsidionis Viennensis (mass as consolation amid lament over the siege of Vienna), a work whose oppressed tone reflects the horrors of war. The extreme chromaticism in the “Amen” sections of the Gloria and Credo is unparalleled in the music of the time. Kerll returned to Munich after the liberation of Vienna. Apart from the publication of two musical works, we know almost nothing about his activities in the final years of his life.

Kerll’s Modulatio organica super Magnificat of 1686, to which the composer appended a catalogue of his keyboard compositions, is dedicated to the Bavarian Electress Maria Antonia, one of Emperor Leopold’s daughters. Kerll had composed these pieces a few years earlier during the epidemic in Vienna, when Maria Antonia herself contracted the plague, so that they must have had special meaning for her.

The last item Kerll published was the collection Hoc opus, hic labor. Missae sex a IV.,V.,VI. vocibus…, which was dedicated to Emperor Leopold I in 1689. This “work and labour” of six masses for four to six voices would seem to represent a kind of final musical testament, since each of the first five masses, including the Missa in fletu solatium, were connected with events in Kerll’s life. He composed the Requiem, the sixth work in the collection, for his own funeral. Kerll died in Munich on February 13, 1693 and was buried three days later in the crypt of the Augustinian abbey.

Kerll’s composing exerted powerful influence on the generations after him. One direct line is represented by his pupils Agostino Steffani, Franz Xaver Anton Murschhauser and Kerll’s youngest son Hans Christoph (while there is no evidence proving that Johann Pachelbel, Johann Joseph Fux or Georg Reutter the elder studied with Kerll, his influence on their work is obvious). But Kerll’s influence also spread in the many copies of his works which circulated throughout Germany. It would be beyond the scope of this article to enumerate all the libraries in which Kerll’s vocal works are still to be found today or in which inventories are all that survive of works now lost. But this is a good place to mention a few interesting facts. On September 4, 1680, before Johann Philipp Krieger left Halle, he made over to the Marktkirche a collection of more than fifty vocal compositions, Kerll’s Angelorum esca among them. It is possible that the young Handel performed this work in Halle under the guidance of his teacher Friedrich Zachow. A handwritten organ book by Handel, unfortunately now lost, also contained compositions by Kerll, and Handel used Kerll’s Canzona in the chorus “Egypt was glad” in his oratorio Israel in Egypt. Moreover, works by Kerll were reputedly among the compositions which Johann Sebastian Bach is supposed to have copied by moonlight as a boy in Ohrdruf and which his brother Johann Christoph forbade him to use. Though doubts have often been raised as to the truth of this story, C.P.E. Bach nevertheless mentions Kerll as one of the composers who influenced his father. Both Johann Sebastian Bach and his successor Georg Harrer revised Kerll’s Missa superba, which had become part of the repertoire of St Thomas’s choir in Leipzig at the latest by the time Johann Schelle became Thomaskantor (1676-1701). The publisher Breitkopf still listed Kerll’s masses in 1764.

More about Battle of Vienna

About Arno Paduch and his Rosemuller Ensamble 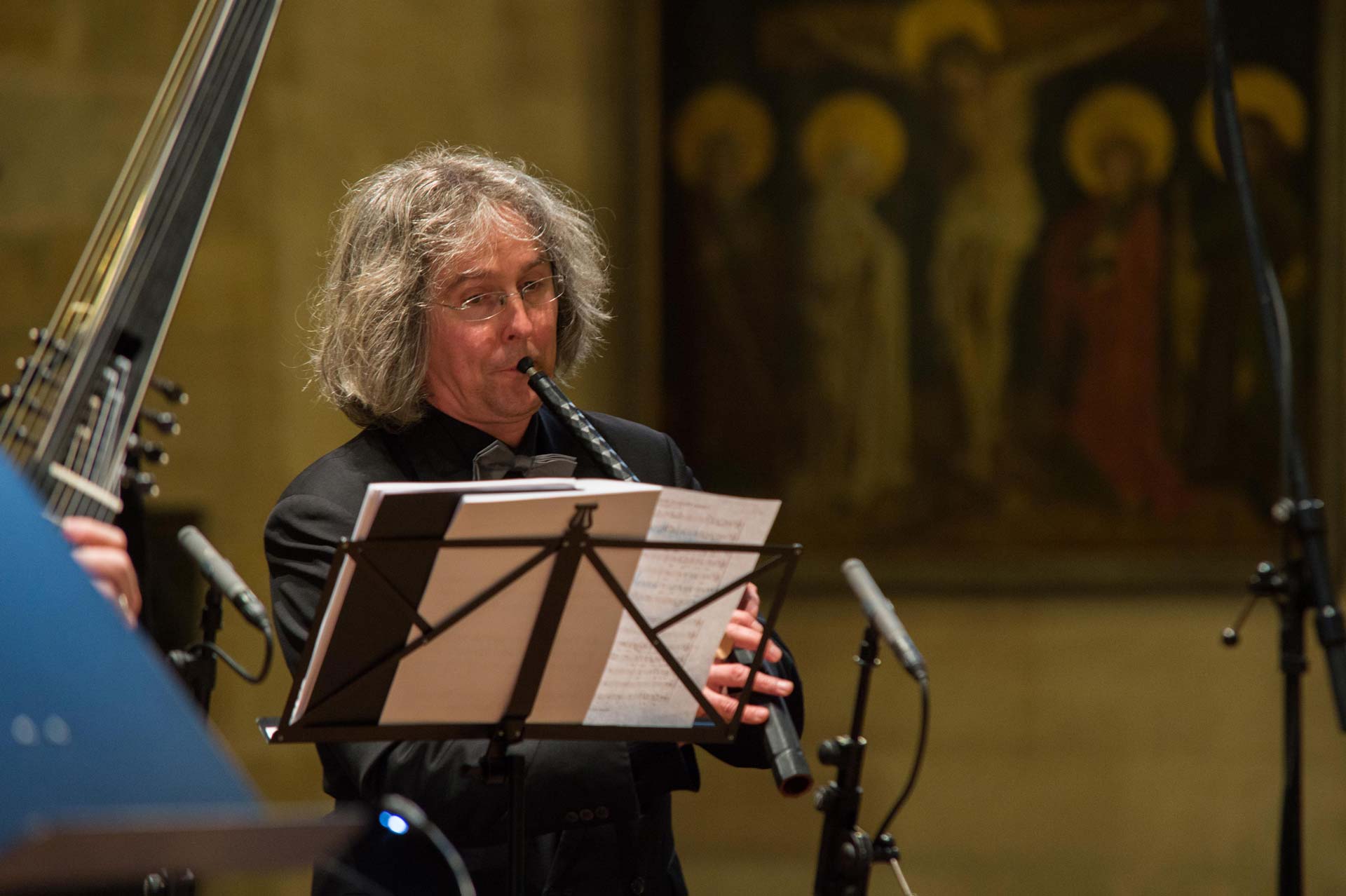 Arno Paduch studied musicology in Frankfurt am Main, and cornetto and historical performance practice at the Schola Cantorum of Basel. He regularly performs with such well-known early music ensembles in Germany. In addition to concertising throughout Europe, he was participated in numerous European radio and television productions, as well as over 80 CD recordings. He has thaught cornetto and chamber music in the early music department of the Leipzig Conservarory since 1992, and has published various articles in noted  learned journals. In 1995 he founded the Johann Rosenmüller Ensemble, named after the famous german composer Johann Rosenmüller, who worked in Venice from 1658 until 1682 as „maestro di coro“ at the Ospedale della Pieta. The focus of the ensemble’s efforts is the performance of little-known music from the 17th and 18th centuries. Great importance is attched to historically accurate performances wich are based on a careful study of the historical sources and are played on copies of period instruments. From 2015 to 2018 Arno Paduch was the artistic director of the Festival „Dalheimer Sommer“ in northern Germany. Since 2018 he is the President of the International-Heinrich-Schütz-Society.

The Johann Rosenmüller Ensemble was founded in 1995 by Arno Paduch. Since then, it has given several very well-received concerts in Germany, including performances at the Handel Festival in Halle/ Saale, the Heinrich Schütz Festivals in Bad Köstritz and Weissenfels, the Middle German Radio Summer of Music, the Weserbergland Music Festival, the Bach-Tage Leipzig, the Festival for Early Music in Zywiec, Poland and in Switzerland.

The ensemble is named after the most important German composer of the generation between Heinrich Schütz and Johann Sebastian Bach, Johann Rosenmüller, whose contemporaries regarded him as the “alpha et omega musicorum”. The focus of the ensemble’s efforts is the performance of little-known music from the 17th and 18th centuries. Great importance is attched to historically accurate performances wich are based on a careful study of the historical sources and are played on copies of period instruments.

The repertoire comprises solo sonatas and motets with basso continuo, polychoral music in the Venetian style, and the cantatas of Johann Sebastian Bach and Georg Philipp Telemann.

The Johann Rosenmüller Ensemble recorded some well-received for Christophorus an Rondeau.